by Rishi Tea | From The Archives, Green Tea 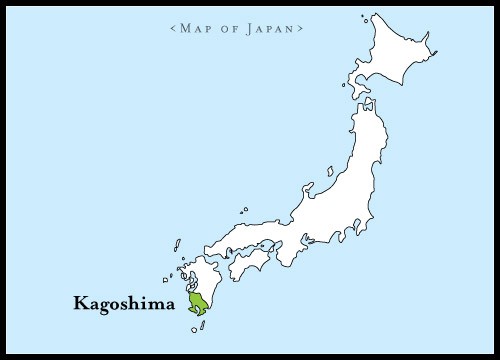 Kagoshima Prefecture is located at the southwest tip of Kyushu (the third largest island of Japan). Kagoshima Prefecture corresponds to the ancient Japanese provinces Osumi and Satsuma. This region was an important naval base during Japan’s 20th Century wars. Kagoshima prefecture is largely mountainous and is home to important lumber, fishing and agriculture industries. Its natural hot springs and southern location make it a popular tourist destination. 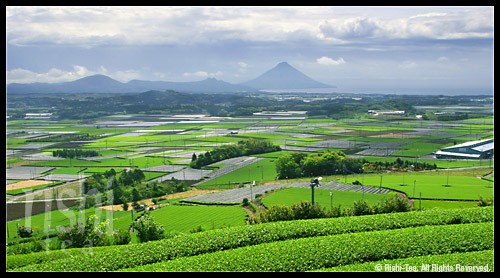 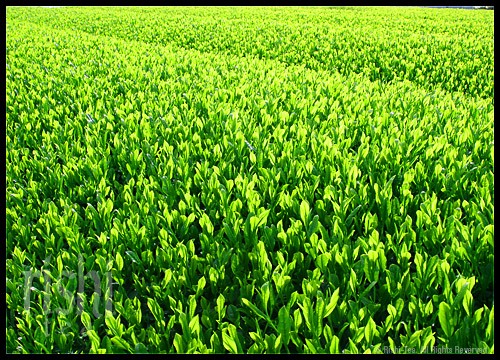 Sencha refers to a variety of steamed green teas. The best of which are from Japan. The varietal of tea bush, the cultivation region, the elevation, the harvest season and the method of steaming and drying the tealeaves are all defining factors to sencha’s diverse range of flavors and aromas. While 70% of Japanese Sencha is made with the Yabukita tea bush varietal, Kagoshima’s tea farmers have developed many new breeds of tea bush varietals for sencha. The vivid green Asatsuyu and aromatic Yutaka Midori types are but a few of the unique Senchas we found in Kagoshima this year. 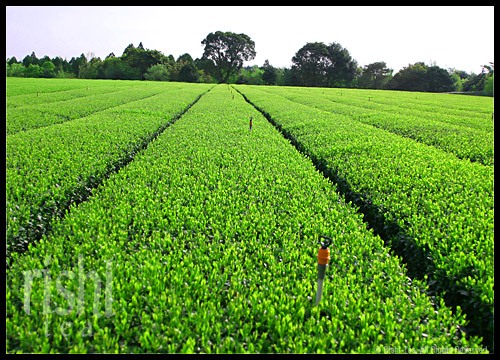 Kagoshima, much like the rest of Japan, has well manicured tea gardens with well-developed irrigation. Farmers follow strict growing procedures to produce this perfect tea bush shape and size that fits the height and curve of the picking machines. 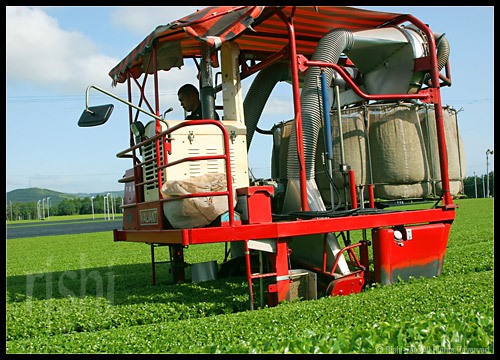 Due to the high cost of labor in Japan, most Japanese tea is picked using a tractor (as shown in this photo) or with a hand held tea-picking machine. Machine picked tea does not allow the farmers to select a strict picking standard and the farmers end up with a lot of stems that get sorted out by machines during the final stages of processing. 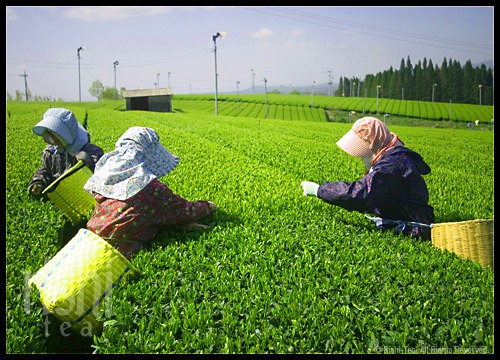 There are a select few reserve teas that are still hand harvested in Japan. This photo was taken during the first flush in Kagoshima. The weather is still quite cold and the winds blow hard on Kagoshima’s mountains. Large electric fans (seen in the background of this photo) are used to protect the tea bushes from frost damage. 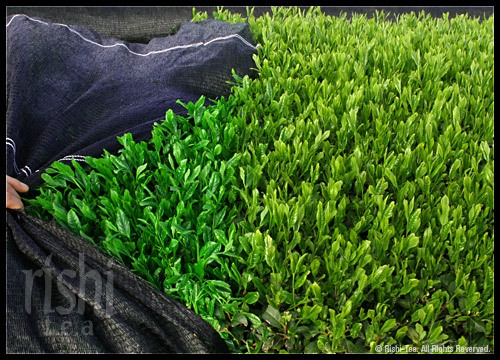 The Japanese word Kabuse means ‘wrapped.’ It is common to see Kabuse or wrapped tea bushes throughout Japan. Wrapping the tea bush facilitates a slower growing leaf that has deeper color concentration, less astringency and also provides “umami,” or delicious, savory flavor found in high end Japanese tea. The bushes are typically wrapped for 4-5 days just before harvest. This photo shows a tea bush that was half wrapped to demonstrate the impact wrapping has on leaf color. The deeper green portion of the tea bush represents the part that was wrapped and the lighter yellowish green portion represents the part of the bush that was not wrapped. 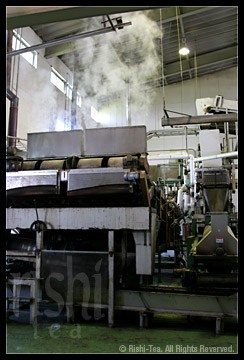 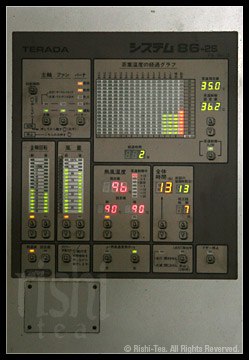 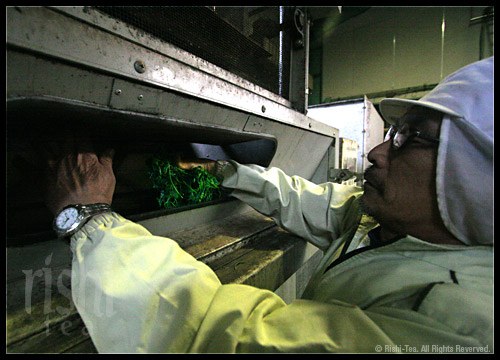 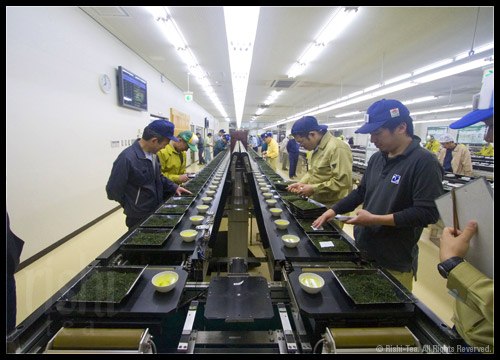 After picking and initial farm-side processing, the tea is immediately taken to auction at the county managed tea auction center. Here buyers, brokers, and farmers come to negotiate the sales of this Shincha (new tea). 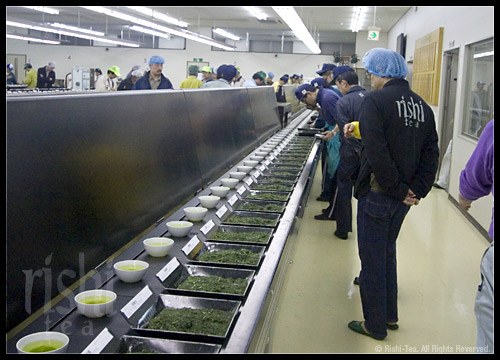 Rishi Tea staff travel to the major Japanese tea producing regions of Japan during each first flush to procure our reserve grade Japanese teas. Buyers, like Rishi Tea, need to inspect many lots of tea to try and match a particular flavor profile and quality. At this particular tea market, no one is allowed to taste the teas that are being sold. It takes expert skill to distinguish the profile and quality through sight of the infused tea and sight and smell of the dry leaves. This is why it is important for tea buyers to visit the farms each day before their teas are sold at the market. A tea buyer can get a better idea of the quality and profiles coming from a garden after he has visited the farms and initial processing. 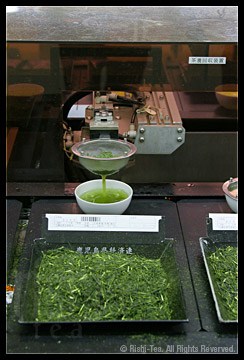 Having consistent brewing for each cup of tea is essential for this evaluation. In this tea market there is a large conveyor belt that mechanically weighs, fills and decants (as seen in this photo) the tealeaves. The tea is then sent around a long continuous loop so that prospective buyers can check them. 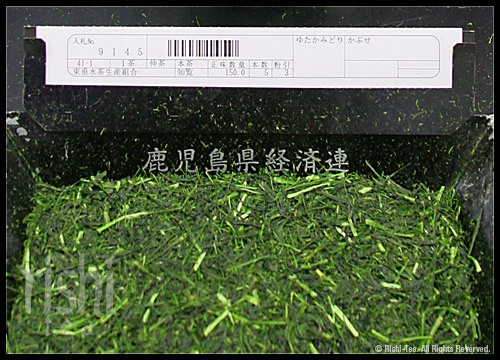 Each lot of tea is given it’s own reference code that tells the buyers the lot’s origin, tea bush varietal, date of harvest, and size of lot. 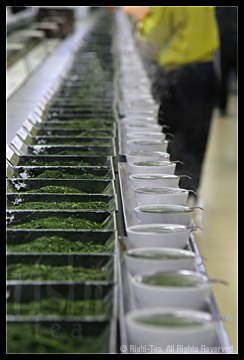 Due to the land restrictions in Japan, the majority of the teas at market are comprised of many small lots (such as 10 kilos). It is imperative for the tea buyer to understand the principles of blending many lots to make up one flavor profile that matches their desired profile. 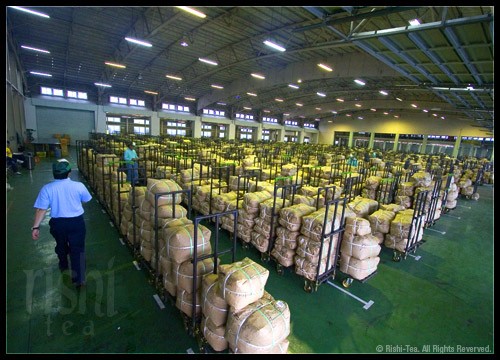 The teas sold in the auction are semi-finished and must be further processed by the tea buyers before they can be sold to the final markets. The semi-finished tea is known as “aracha” which translates to “crude tea”. After the tea has been sold, it is shipped from the tea market’s storage directly to the buyer’s final processing facility where special sorting, baking, blending and other final processing steps are carried out before the tea is sold into the wholesale market.